The history of Under Armour Basketball shoes is not too old. Under Armour had started its business on 25th September 1996. It had founded by Kevin Plank, and he is the captain of its University football team of the University of Maryland. It has started the business with the T-Shirt. In 2002 Under Armour underwear had launched; it has specially designed for athletes. In 2006, Under Armour had entered the sports shoe industry with football shoes.

Now Under Armour has a variety of ranges for Men’s, women’s, and kid’s shoes for basketball and other sports. 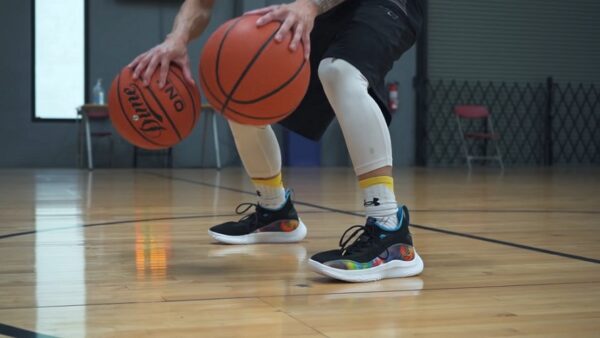 History Of Under Armour Basketball Shoes

Under Armour has one logo for all its product range, either it is for apparel or footwear. Kevin Plank wants to make the simple logo just with the alphabet U & A, the first letter of his company. Firstly UA shirt has worn by the Oakland Raiders player.

The First-ever Under Armour basketball shoes launched in 2010 with the name of Under Armour Curry 1. It has state-of-the-art charged cushioning, and the upper has foam cushioning with a herringbone outsole for reliable traction. It is the first signature shoe of the NBA Star Stephen Curry.

After the successful launch of the curry 1, Under Armour and Stephen had launched UA Curry 2 in 2015. Foxx has the right to promote the shoes officially. It was the first time in basketball shoe history that any shoes have manufactured with full-length charged cushioning.

It is the third signature shoe of Under Armour that had officially launched pm April 2016. The Baller has rocked NBA with this shoe by a record 73-9.

In 2016, the warrior loosed the NBA final first time. Under Armour Had launched Under Armour Curry 3 in October 2016. It has manufactured with Under Armour’s new fabric technology at that time. There are multiple technologies in this shoe, such as Anafoam, Threadborne, and charges cushion.

It is the 5th signature shoe by Under Armour with Stephen Curry. Its official launched was in March 2017. It was available in-store in May 2017. It has a super breathable mesh upper, and it has a stability system in the heel area. The midsole has equipped with Micro G foam and, as always, charged cushioning.

Under Armour Curry 4 had launched in June 2017 and wore the first time in the NBA final. Its design has completely changed from the previous Curry serious shoes. It has high-top basketball shoes, and a high top has made with the knitting. There is a full-length speed plate in it. Its midsole has been manufactured with EVA technology and a unique designed cross-center traction pattern for a perfect traction experience.

In August 2018, Yet another shoe launched by Under Armour. The lacing system is singularly webbed. It is specially designed for the perfect lockdown and to avoid any loss or slippage. The upper is perforated for breathability, and its tongue is also breathable. Its midsole has Micro G, and Its also has charged cushioning.

UA Curry 6 has launched in December 2018. It has the Hovr cushioning with a textile upper for perfect breathability. Its external counter beside the heel will give you fantastic support and stability. Its full-length plate also enhances stability.

7th generation of Stephen curry signature basketball shoes has launched in October 2019. Curry 7 has a unique color combination of black and golden and white equipped with the Micro G and UA HOVR midsole. It is the low-top basketball shoes with textile upper and perforated tongue for breathability.

The 8th generation basketball shoes by curry has launched in December 2020. It has a full textile mesh upper for breathability. It has a multidirectional outsole pattern for reliable traction.

The forecasted launch date of Under Armour Curry 9 is at the end of 2021. The basketball player is very excited about the Curry 9 for the upcoming NBA season.

Under Armour Curry Flow 9 had released on 1st July 2022. Its weight is 12 Oz with UA WARP upper technology. It has the TPE-blend sockliner with UA Flow cushioning technology

It has launched on October 21, 2022 and the weight of Under Armour Curry Flow 10 is 12 Oz which lies in light weight shoes category. Its has the amazing outsole grip supported by unique outsole traction pattern

Q-4: Where are Under Armour shoes made?
ANS: Under Armour has the manufacturer in 18 countries. The main big units are in Vietnam, Jordan, Malaysia and China.