As basketball is getting more competitive and fast, the basketball shoe evaluates with the same pace. The feature we have now in basketball shoes was just the dream at the start. Nowadays, every sport, even the position of every sport, has a specific type of shoes designed according to the requirement of that playing position.

Let’s have an in-depth study of the above.

First Basketball Shoes Ever Made 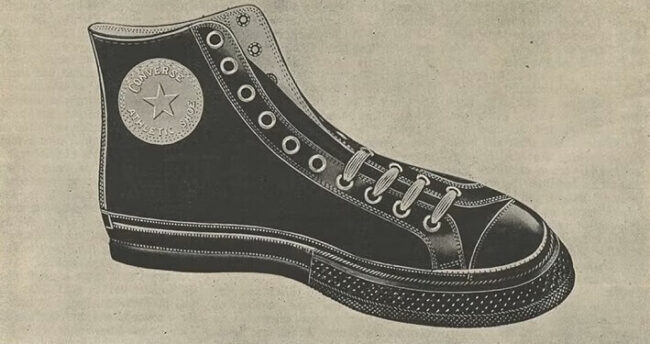 In recent years the basketball shoe growth is prolonged, but after the 1960s, it grows at an excellent speed.

Now you cant see these shoes in NBA, but it was the king of this era.

The 1970s is the golden decade for basketball shoes. There is a lot of development in basketball shoes during these ten years. Before the 1970s, you can only found the Converse All-Star on the NBA court.

Nike introduced its first-ever basketball shoes in 1972. The shoe’s name is Nike Burn. Its design has made with leather and suede. In 1978 Nike had launched its new shoes with the name Nike Blazer.

Adidas has come up with superstar Royal Master. Superstar initially supposed to be launch in 1969, but due to some reason, its launches have delayed, and it had finally launched in 1971.

After the tremendously growing decade of the 1970s, three top sports shoe manufacturers have introduced their basketball shoes. The 1980s come up with a decade of more expansion.

Nike has introduced famous and top seller shoes, “Air Force 1,” in 1982. Its name has on the name of United States president plane. After the 39-year Air Force, one is still one of the top basketball shoes. Firstly, Moses Malone has used this shoe.

Reebok Pump is the main highlight of the 1990s. It was launched in 1991. The reason behind its success is the 1991 NBA Dunk competition. Young players were using this and perform like a professional dunker such as Dee Brown.

In 1994, Nike launched its next version of Air Force and Air Jordan as well.

Adidas has also come up with Adidas Crazy 8. Kobe Bryant has first use professionally in NBA. Kobe is now a member of the Nike Basketball shoe department.

In the 21st century, every shoe brand has sped up in their new shoe launch.

Nike Shox BB4 launched in 2000. It is the first-ever Nike Shoes with the Shox technology.

2003 is the year in which Nike has launched its all-time favorite and comfortable Nike Air Zoom Generations. Lebron James has the first player who used this shoe. This is the Air Zoom inside the shoes to give you extra bounce and comfort at the same time.

NBA grow rapidly in the era of 2010 to 2020. There are many masterpiece basketball shoes released in this era such as Kobe Bryant’s many models. The famous model series is the Nike Zoom Kobe series, Air Jordan 31, etc.
Some other hot-selling models are

Some successful and famous basketball shoes released in 2022 are

Evolution Of Basketball Shoes is the never ending process as far as the basketball game exist.

These are some basketball shoes which has launched after the 2000s decade.

Some of my favorite basketball shoes release in 2023 are

AdiZero has launched in 2010