Basketball is a very thrilling and action-packed game. This game is not as complicated as it looks. Thankfully, the fundamentals of basketball is very straightforward. There are some exceptions, though, that we will be discussing in this article about basketball basics.

If you are the young or the new player or coach then it is very crucial to know the exact basketball basics, rules, and concept as well to avoid any foul play.
There are two teams in basketball and each team has five players, the game in which it has played is called a court

There are many things you need to know in order to grasp the concept of basketball fundaments to the core fully.

Let’s discuss them one by one.

Basketball is a top-rated game in the United States. The objective of the game is to throw the ball in the hoops to score points. The scores depend upon the distance from which the ball hs thrown into the hoops. In the end, the team with the maximum number of points wins the game.

There are two types of clocks in a basketball game.

After getting the possession of the ball, the team has a limited time to make the shot. This time varies from league to league.

The basketball game starts when the ref throws the ball up in the air standing at the center ring. Each team then starts struggling to get the possession of the ball to secure points.

There are a total of twelve players in each of the teams. There can be a maximum of five players in the Basketball court at a time. The team can have as much as substitutes in the game as desired. There is no restriction on the number of substitutes made. 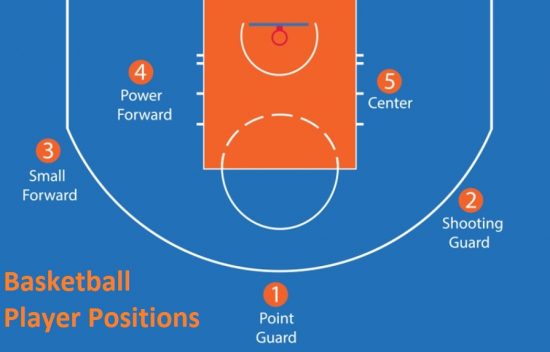 There are five players from each side of the team in the basketball court. The players have known by the position they possess in the court.

The names for the players used in the basketball are:

The point guard, which is also known as the one, is the leader of the basketball team on the court. The player present on the point guard is responsible for running the ball and controlling the game.

These players are usually very lightning-fast and create the chances of points for their own and all the other teammates as well.

Point Guard players are also known as the “Field Coaches.” These players analyze the weakness of the opposing team’s defense and create the strategies.

Shooting guard is also known as the “Two” or “Off-Guard.” The players occupying the shooting guard position are skilled shooters, and they are responsible for getting points for their teams. These players have trained to shoot the ball from long distances.

Some shooting guard players have excellent ball-handling skills basketball too. They create chances for shooting the ball themselves during the dribble.

A versatile shooting guard has the abilities of a right point guard and shooting guard. Players who fit the hybrid role are called the “Combo Guard.”

The typical height range for the shooting guard player ranges from 1.85 m to 2.01m.

Small forward is also called “3”. These players have a variety of features in their skill set. They are fast and have incredible strength. They are often also the second-best shooters available in the team after the shooting guards.

The typical height range for the small forward ranges from 1.92m to 2.04m.

Power forward is also called the “4”. These players are the team’s most potent and heavy players. The responsibility of the power-forward is to sit in the low blocks. They can score close to the basket, and the maximum shooting range for these players is typically 10-15 feet from the basket.

Most of the power forwards are more versatile than the centers. They can be part of the play instead of staying on the low block.

There are two types of center; one is Offensive, and the other is defensive. The goal of both is understandable by its name.

The center ring present at the mid of the basketball court is used to tip-off the ball.

The half-court line, as the name suggests, distributes the basketball court into two different sections. This line is present at the center of the court.

This line has various other names such as the ten-second line, division line, mid-court line, etc.

On the other hand, if the player shoots the ball inside the basket inside this line, he gets two points for his team.

The free throw lane or the key is the painted area that is beneath the basket. This area prevents the opponent players from staying in the area for longer than three seconds.

If a player has the ball, he usually bounces the ball onto the floor to move towards the basket. This bouncing of the ball is called the dribbling.

You can only dribble the ball and cannot restart dribbling again after holding the ball. Doing so results in the form of penalty.

The ball can be passed to the next player when a player stops dribbling within five seconds.

The basketball game revolves around the scores. To score points, you have to throw the ball into the basket.

There can be three, two, or one score for each ball thrown into the basket.

The player has awarded three scores if he throws the ball into the basket from outside the three-point lane.

There are two scores for each ball thrown into the basket while inside the three-point line.

Each free throw in the game carries one point. It is termed as free throw because there is no hurdle between you and the basket other than the distance.

There are three main types of penalties in the basketball game. With each penalty, the ref blows the whistle, and the game stops for the assessment of the penalty.

When one team has the ball in possession, the other team tries to get the possession of the ball back. The players from the defense team try to stop the offensive player from scoring points.

During this, the defense players may make mistakes that have not permitted in the game.

The basketball ball has to be carried in a certain way to secure the points. You have three ways to move the ball. Either dribble, pass, or shoot. But all these points come with some sort of restrictions.

Breaking the rule results in some sort of penalty.

Certain time penalties apply in the game. For example, in the NBA, each time we should have at least one try to put the ball in the basket every thirty seconds.

Certain penalties apply when you do not follow the time restrictions.

If you want to learn the basics of basketball, then few things should be kept in mind as well.

In addition to this, one of the things are the violations. Besides, it is one of the main important things to take care.

If you begin to take some steps without dribbling the ball, then it is considered as traveling. Hence, moving your turn foot whenever you’ve quit dribbling can also be called traveling.

When a player starts dribbling the ball and moves his hand far right or left or under the ball, it can be termed as palming or carrying.

Suppose the offense player fails to bring back the ball in 8 seconds from the backcourt to the frontcourt. The penalty if this violation is the turnover. This 8 seconds rule has imposed in 2001~2002; before that, the time is 10 seconds. The 2 seconds has reduced to increase the tempo of the game

Keep in mind that if one the offence crosses the mid-court line, then there is no turning back. Nevertheless, if the line is crossed, the ball in turn is given to the opponent team.

Every so often, at least two rival players will acquire possession of the ball simultaneously. To evade a delayed or potentially rough tussle, the official stops the activity and grants the ball to one group or the other on a turning premise.

11. Restriction Of The Time

Similarly, the other rule is that, if a player is guarded closely, he can not keep the ball for more than 5 seconds.

There are four playing periods of 12 minutes each
There are 5 Minutes of the overtime period.
There is 15 Minutes gap between two halves of the game.
There is 2.30 Minutes break between the 1st and 2nd period and the 3rd and 4th period.
The disqualified player can be changed in 30 seconds.

The Basic time violations are

It is very essential to know the all basketball basics rules either you are the player or coach or referee.

Let’s suppose if you are the legend NBA player like Michael Jordan; you don’t know the basketball basics system, rules, and scoring system, then you can’t have a positive impact on your team win.

Your dunk well, but it is the foul

You defense well but with foul

You need to score 3 points to win the game, and you don’t know where you can get the three-point point.

You must need excellent knowledge of basketball basics to have a positive impact on your team win.

Frequently Asked Question For Basics Of Basketball In 2022

Q-1: What are the 13 rules of basketball basics?

Reply: In the NBA matches, rule 13 is “There are four quarters of 12 min each and the half time break consists of 15 min.”

Q-2: What are the five fouls in basketball basics?

Reply: The five basketball fouls are

Q-3: What is the 10-second rule in basketball basics?

Reply: The offensive player or team has to cross the ball within 10 sec across half court. Otherwise, the offensive team loses possession of the ball. Once the Offensive team has crossed the ball from the half-court, and this is called over-and-back

Q-4: What is the 24-second rule in basketball basics?

Reply: In the short clock, the team allows us to make a shot within 24 seconds. If the fouls occurred then the opponent team will get the possession of the ball

Q-5: What is a 5-second violation in basketball?

Reply: A five-second violation generally committed by the offensive player. When the player has closely guarded for five seconds or more, the five-second foul has occurred.